Today Topic is as below.

Besides sushi and sashimi,what do the Japanese eat ?

Many people the world over know about Sushi & Sashimi 刺身,which are popular raw fish dishes.But just as with other major international cuisines, Japanese food has an incredible amount of variety on offer.

Because Japan is surrounded by sea,fish has always been a prime source of meat for the country .And because of this,there are countless dishes in Japan that include fish,
several of which are served on a seasonal basis.

Fish is usually grilled,marined or simmered with the other ingredients in a pot.Fish is also used to make soup stock.

In most cases,the basis sauce used in Japanese cuisine is SHOYU,which is a sauce made from Soy.

And miso a fermented soy bean paste , is used in cooking as well.While these tastes are common year round , the vegetables and other agricultural products used with them can be quite seasonal. 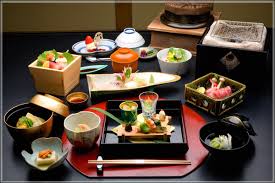 In this style of dining , several courses of small dishes are served.Each dish is not only tasty in a way that is different from the others, but it is also beautifully decorative.


Another well-known type of food in Japan as which is made using deep fried vegetable , meat and seafood as well as rapeseed oil . In this style of dining , you can enjoy not only battered seafood but battered freshwater fish as well.

Another popular dish is called UNAJU,

which is a bowl of rice covered with roasted eel.Eel in Japan is commodity served in the summer, as many believe this food has quality for restoring one’s energy during the hot months of the year.

For roasted dishes, Yakitori 焼きとり is a Japanese favorite,

which usually comes in the form of skewered chicken barbecued and flavored with a sauce or salt. 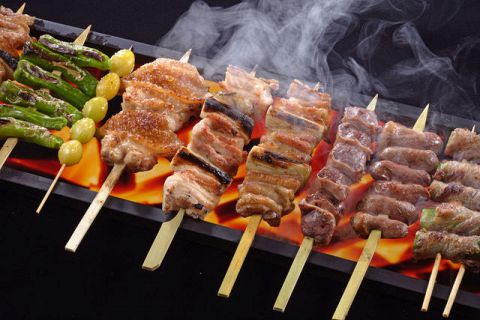 In a winter, people love pot cookery because it warms them up すき焼き is one such type of cooking.Shabu Shabu is another popular type of pot cookery.For shabe shabu しゃぶゃぶ people dip meat and vegetables into boiling hot water and swish it back and forth until it’s cooked.They then dip the meat or vegetables into dish of sauce before eating it.

Meat in Japan is recognized around the world for its tenderness and rich taste.
KOBE beef and MATSUZAKA beef are two example of Japan’s top quality meats,which should definitely be tried on a visit to Japan if you don’t mind paying a high price for high quality .

One more thing that any traveler to Japan should know about is misoshiru 味噌汁、or miso soup , made using miso paste and miso stock,and commodity served with most Japanese meals.This is certainly Japan’s most popular soup.